Came across the song “Raindrops on Roses & whiskers on kittens’ from The Sound Of Music a few days back while attempting to play some songs for my kids on Saavn. And then they asked, “Mama – what are your favourite things?” I paused for a very long time, enough for them to feel that I hadn’t heard them. I had to beg for time and get back to them post consciously thinking about it.

It’s funny how as adults we lose touch with ourselves in the daily rigmarole of life. The Kids had their answers ready. My daughter said she loves the orange cycle handed down by her brother, chocolates & then one of her stuffed toys. My son the constant thinker, also surprisingly came out with his answers – Books (that pleased me very much :)), Trains and his Tablet.

So here’s the same question to you. What are your favourite things? Have you thought about them? Have you experienced them in a while? And I mean inanimate objects so no favourite persons please. Of course, there are many of us who love shopping especially the women, who would know exactly what they like and want! 😉

Yours could be – perfumes, diamonds, dolls, cupcakes, cheese, jam biscuits, shoes, bags, scented creams. An easier way to come up with your list could be to think of your collections – shoes? Stamps? Coins? Gift wrapping paper 😉

Think think and do post your comments. I’ll be waiting for you.

My comfort zone in the literal sense of the word, is my little corner beside my bed. It has all the things I love right there – my favorite books (or rather the current one being read), a table clock, a lamp to keep the room cozy and warm and a family pic. Not to forget my little stool to sit on. And why is it my favorite? Well, like I said it has my favorite things, it’s where I escape to when I want some solitude and its where I chat with my little girl early morning as I wake her up for school. I have my tea there as she nibbles on her daily dose of 2 Oreo biscuits, half asleep half awake talking nonsense 🙂

So do tell me about your favorite corner and why you love it so much. And a couple of pictures will be just great for all of us to relate to your special corner too.

Look forward to some interesting reading.

“Fall of the cliff if you will, but leave the mountain alone,

The times we are in today, no longer trusted anywhere near nature!”

I grimaced at this signboard as we reached this point and muttered the above complaint to my husband.

He gently said, “You’ve got it wrong, this is a landslide prone zone.”

Written for Friday Fictioneers, a weekly challenge set by Rochelle Wisoff Fields to write a story in 100 words or less in response to a photo prompt. You can find other stories here. 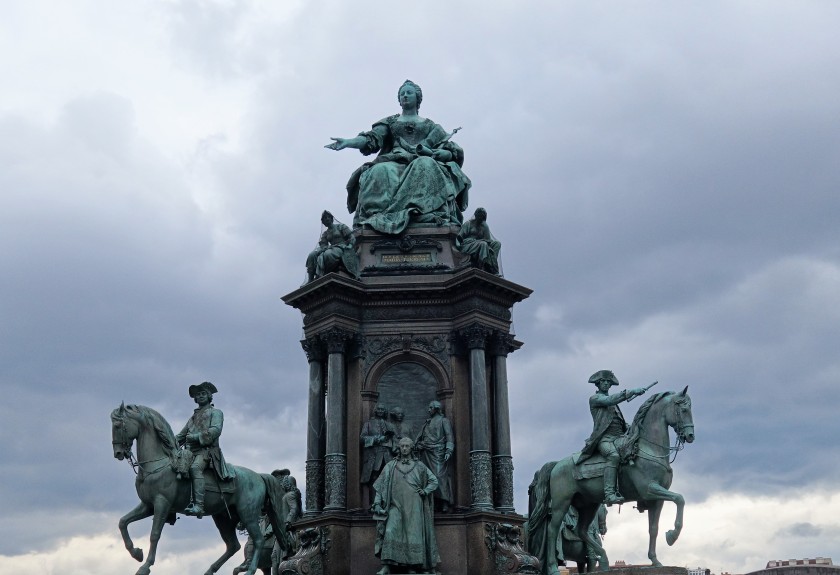 This is a picture (shot by yours truly) of the great Maria Theresa – the Queen of Austria, Hungary and Bohemia – one of the most successful rulers of the Hapsburg dynasty

Well this happened a few days back but has stayed in mind since and hence I’m making a mention of it here. My daughter came up to me and said, ” Mama, so & so’s mother has told him not to play with me”. Before I could ask her why, she said, “because I’m a girl”!

I was not shocked about the not playing together bit, but more about the reason given. This boy and she were good friends but fought often. I thought the reason would be because the two fight constantly, but the gender word here, made things complicated. I knew what her next question would be – why? And it came invariably.

For a moment, I didn’t know what to say. But after a minute I said, “because he can’t handle you. Because you are too smart for him”. And I truly believed it then and now. Mother’s no matter how educated tell their boys not to play with girls when the girl is too much to handle or when they do not want their boys to get influenced by supposedly girly games. In this case, it wasn’t the later, because my daughter plays football, badminton, running races and climbs like a monkey, and if anything would come out tops in any race/game they played. Plus the fact that every time they fought, she gave it back squarely to him. Anyway, the point is this – mother’s (and supposedly educated women) are even in today’s world/time dishing out such crap to their children/sons – being women themselves! How then can this gender bias end?

Another incident took place a few months back – my daughter’s chess teacher casually mentioned to me that one of the boys in her group, wanted to change the group because he wanted to practice with only boys. We’re talking of 7 year olds here. So in a chess class, parents feel that boys play better and should practice with boys only & that too in a game like chess! Wow! I had no words to express my disbelief.

Further, another mother celebrated her son’s birthday – inviting only the boys of the group despite the fact that her son played with girls too! And here we celebrate women power/bonding and understanding on women’s day? We talk of ending stereotypes & biases, when we ourselves plant these seeds or accept them?  How hypocritical can we get. Women – if you can’t respect your own gender, don’t expect others to.